Considering what it is, Facebook is a weird platform: tech-wise, it can be frustratingly archaic. No text formatting functionality—bold, italics, headings, etc.—is provided for posts you create, for example. That makes sense on Twitter, but on highly visual Facebook, I think it’s silly. Even LinkedIn has that basic feature, as you can see in the Wordpreneur Bulletin I’ve started to post there (and I’ve long thought LinkedIn has a kludged up feel!).

There is somewhat of a workaround, however: Unicode. That’s a character encoding standard. Long technical story short, you can use Unicode to do some text styling on Facebook posts, and on other platforms that also recognize Unicode, like Twitter. As a text styler, there are things it won’t do, such as resize headlines, etc., but there are a surprising number of “styles” you can apply, from basic bold and itals to some funky stuff like putting squares or circles around each character, or even doing the text upside down.

Don’t get intimidated by all the “coding” talk—YayText handles all that. Just go to the site, choose the style you want from the surprisingly long list of options, type in the text to be styled, and click Copy. Paste it to wherever in your Facebook post it goes, and that’s it!

I think I’ll be using YayText for the version of the Wordpreneur Bulletin I’ll also start posting soon on the Facebook Wordpreneur page so it won’t look so plain text yucky.

“...prompt with every communication, was very creative and took one of my ideas and made it so beautiful...” 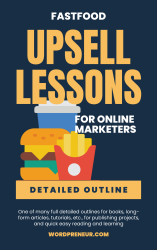