[themify_box style=”light-yellow note rounded shadow”]Luddites love using this argument in their fight against the rise of ebooks in the marketplace: “eBook sales are flat/declining.”[/themify_box]

Well, of course! It’ll be the same thing, pretty much, each sales period. Because if you haven’t figured it out yet, this is right smack in the middle of “No sh*t, Sherlock” territory.

Even if you’re heavily biased towards trad books, pay attention — knowing certain facts and truths will go a lot further in helping keep those dead tree products around significantly, since the kind of BS we’re dealing with doesn’t historically hold up well at all against smart, nimble and powerful competition.

Don’t worry, I like to simplify things to core points and concepts. Maybe we can get through this quickly and without injury. Here’s the first major reason why those “industry sales reports” are the way they are.

1. Industry = the Big Five. Yeah, there’s data from a good number of bit players in those market reports, but I don’t think you’ll find anyone worth talking to who won’t admit that the data we’re futzing around with is pretty much Big Five data, both directly (majorly) and indirectly.

Here’s one of those “open secrets” that interestingly enough still seems to surprise some people until they actually sit their asses down and think about it: The Big Five’s not really good at book marketing. When was the last time you’ve seen them deviate meaningfully from the old school approaches? In this day and age of the Internet and digital marketing even? Click! What they really do is just publish a bunch of product, the vast majority of which will sell squat. But there’s always a certain percentage that will sell exceedingly well. That tiny fraction of hits pays for the squats… and then some.

It’s a brilliant, very old school business formula, folks. Nothing more. So you can put aside any “Business Innovator of the Year” trophies you may have wanted to award them.

Solid system. Served these old “gatekeepers” well for a very, very long time. Until something happened that screwed it all up.

The Internet and Amazon.

DING DING DING DING! Can you see how this all is playing out now? No? Don’t worry, there’ll be a lot more on this simplified story in the next issue. And frankly, even in basic, simplified form, it’s quite fascinating and illuminating!

Now, I’m in the mood to get some reading done. Here’s today’s dozen. Have fun! 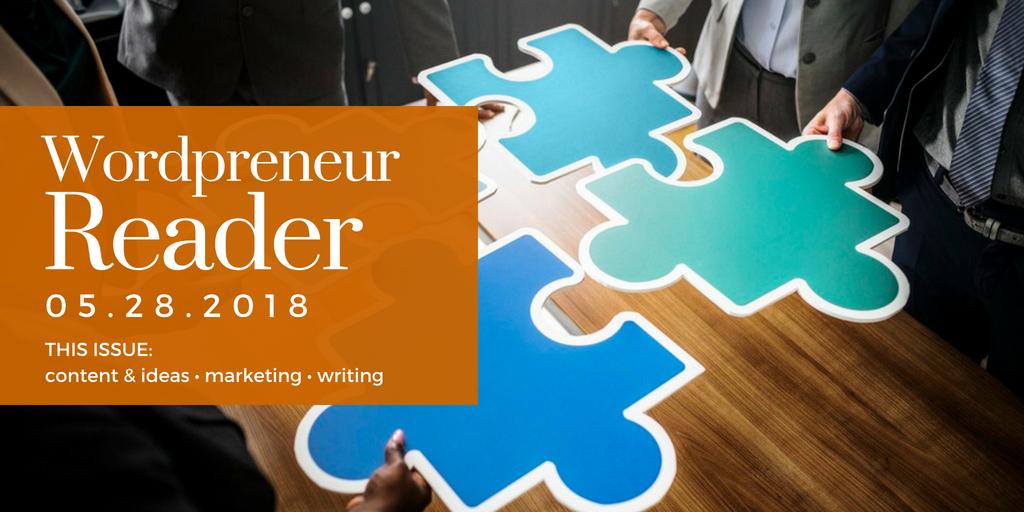 5 Tips for Making Time to Make a Difference

“In essence, he has affected a widespread and sustainable change in economy and culture throughout his corner of the world… What’s his secret to keeping it all moving forward?”

“Escher’s fame spread outside of the sciences in part through the interests of the counterculture. He… had an innate penchant for the marvelously weird…”

The Best Way to Win Is to Know When to Quit

“There is a nearly infinite number of reasons why projects don’t pan out… The mark of a great business mind isn’t in never failing, but never letting that loss define you.”

GitHub gives us a glimpse into the collaborative future of work

“[E]very company is becoming a tech company. It’s already clear that, even in the near future, development teams are going to be the focal points of more and more organizations, and that GitHub will, too.”

How to Lead a Virtual Team: 6 Essential Tips You Need to Know

“The rules have changed. You don’t need an office. You don’t need investors. You DO NOT need permission! … Today, anyone with a good idea (and an addiction for success) can start their own business.”

“The Times decided to do more pop-up newsletters after seeing its ‘Game of Thrones’ newsletter take off… Some 80,000 people subscribed to the eight-time newsletter, and the email had a 60 percent unique open rate.”

Get Started With a Shoestring Marketing Campaign – Here’s How

“How do you compete with big companies … Can you really find all the customers you need to grow your business without branding agency strategies and costly above the line spend?”

“[A] great story starts with captivating book characters. So how do you create fictional people who have realistic complexity, who’ll hold our attention—and our hearts—over several hundred pages?”

Developing a Bad Idea into a Better One

“Here are my tips for reconstructing a story element. There are other approaches, but this was the way I was able to do it without making my head spin too much…”

How to Write the Perfect Mystery

“[T]here’s no magic formula… There is, however, the wisdom of the greats… Scouring the books, interviews, letters, and articles of these icons, we’ve assembled a handy guide to writing a great crime/mystery novel.”

The Difficult Truth About Writing When You Have Kids

“[L]et go of the guilt. You’re not just a parent – you’re a person in your own right, and there’s nothing at all wrong with taking some time for yourself to do something that you find fulfilling.”

Zero-Cost Book Publishing: Write, Publish & Sell Your Book Yourself… for Free!
Free Domain Names: Where to Get Them and How to Use Them
Spread the love
« Reader 05/25/18 Edition » Reader 05/30/18 Edition