I’m not going to pontificate here on whether gaming systems is morally suspect, yada yada. Doing them is totally up to you. Whatever game you’re playing to gain some advantage over the way a system is built, designed and is actually supposed to be used, screwing around with that is most certainly “within the rules.” Technically. For now, anyway.

These are system holes, ladies and gents, and sooner or later, these holes will more than likely be plugged up. Which means if your business model banks heavily on being able to work and take advantage of these holes, well — surprise! — someday, that’ll just likely come to a screeching halt. And seemingly overnight, with no warning. One day click, it’ll all just go dark.

Google’s search results algorithm is a perfect example of this. Trying to take advantage of how it works is a never-ending source of system gaming examples. In the early days, for instance, keyword stuffing reaped huge benefits, moving practitioners’ sites way up in the search results, much to Google’s users’ dismay. Huge business operations were actually built around sites taking advantage of this technical hole.

Then one day — click! — no more. The faucet with the flood of inbound traffic was shut off. All those advertising $$$ from that traffic (AdSense, affiliate marketing, etc.)? Gone too.

That’s not the end of it, though. As far as I know, these keyword stuffing sites started getting penalized in the algorithm’s search results. These sites were now worse off than the clean folks. All that system-gaming content? Useless. Heck, worse than useless: damaging. They either had to invest huge sums to redo all their content, or die. Many died.

That’s the thing, folks: System owners hate the people who game their systems. Passionately. And for obvious reasons. Here’s a simple one: It screws up their business operations and income. Duh.

LOTS of examples of this kind of thing going on through the years, and not just with the search engines. Social media sites battling follower farming is something you’re likely aware of, for instance.

Indie publishing itself isn’t immune from system gaming, which is the whole point of this post. Amazon sure has problems with them. And a lot of the games aren’t based on some technical or logistical hole in an automated system that can be easily plugged up. Ergo, they’re a bit more difficult for Amazon to “clean up” and start preventing. I would imagine that doesn’t make Amazon very happy.

The latest clean up mess I’m aware of, picking up from forum whining, is Amazon cracking down on ARCs. That stands for “advanced review copies.” Amazon’s not against them in general, obviously, just the practice a lot of indie authors have been employing of assembling and using “ARC teams” — people with Amazon accounts whose whole raison d’être is to post those star-rated Amazon customer reviews. Besides just padding the review counts, timed well around book launch, those usually glowing reviews paint a rosy picture and prime the pump, so to speak. These “reviewers” get ARCs not to review and write about in regular media or even their own blogs to share with their readers — you know, old school legit ARC activity — but mainly for futzing with those Amazon customer reviews. It doesn’t really take a genius to figure that out, so save it.

Yeah, Amazon could of course turn a blind eye to the whole thing, but apparently it’s chosen to do a solid for its customers instead. Why that would be a surprise to anyone, I have no idea.

Just as unsurprisingly, Amazon’s none too happy with the game players. I don’t know the exact technical details, but it seems they’re all now on some internal watchlists (those can be automated too… surprise!). The ARC reviewers are seeing many of their reviews zapped, and they are now being prevented from posting reviews pretty much everywhere; authors are seeing their books’ existing reviews purged, yada yada.

As you may have guessed, however, this kind of manual/automated-hybrid cleanup effort is causing some real problems: There’s the inevitable collateral damage. Many of these books are seeing a significant number of legit reviews getting nuked as well. Interesting, huh? If you think about it, much like the Google keyword stuffing thing, the game players seem to be losing way more than whatever gains they may have enjoyed screwing with the system.

Funny how that works. If you’re caught up in this kerfuffle, good luck getting it all sorted out.

But hey, I’m not stopping you from trying to game the system if you’re so inclined — large scale, small scale, it’s all the same (yeah, killing just one person instead of 10 makes a difference, hmm?). But please, spare us the whining, and even the outrage, if it catches up to you.

This all just reminds me of this very common saying I keep stumbling across online. Amazing how well it fits:

Now on to the Reader’s featured selections! What say we keep it simple today and stick with an all-Writing issue? OK, let’s do that. Enjoy! 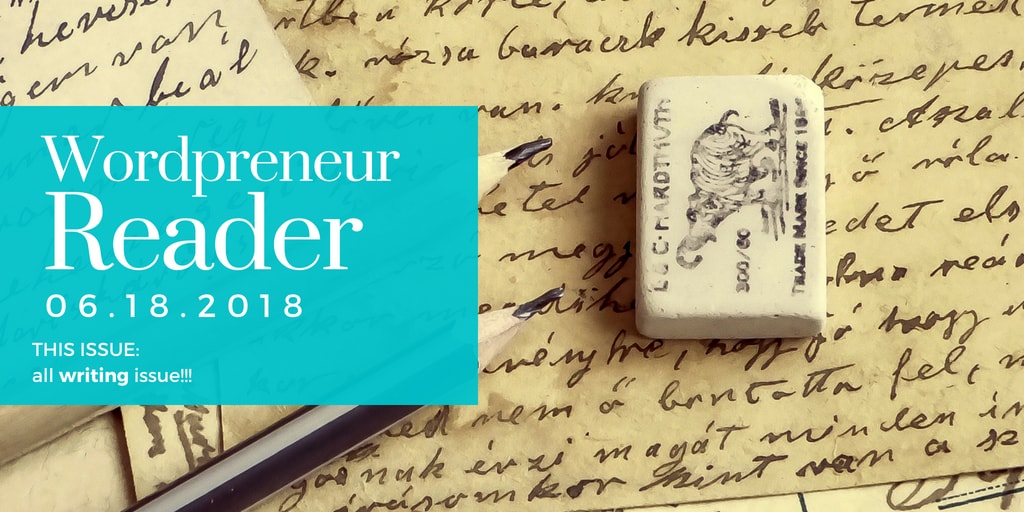 “I’ve collected some advice from talents much greater than mine.  I call them my secret tricks or rules. These have worked for me and may be something you could use or experiment with. I’ll share these with you with some ‘before’ and ‘after’ examples…”

“Look, write what you know isn’t bad advice, per se… the problem is that some writers misunderstand it and take it far too literally…”

Building a Platform to Land a Book Deal: Why It Often Fails

“The dream-crushing cynic in me is tempted to say: Don’t force it, because it won’t work. You’re reverse engineering a process that—in the majority of cases—is destined to fail.”

Do Your Book One Hill at a Time

“When faced with the goal of writing a book, or any sizeable writing project for that matter, the task ahead looks daunting. Discouraging. Even to experienced writers! Hardly a surprise.”

ED—Yup, this is one of mine. What the hey, its motivational. Enjoy!

“Jennifer Shiman had the dream career for so many creatives… She was, for 10 years, the rarest of unicorns: a successful one-woman animation shop… Then she burned out.”

How to Outline a Book

“It’s possible to write a nonfiction book by the seat of your pants, but having an outline helps you know where you are going with your message so you are able to write in a straight line instead of taking time-wasting detours.”

How to Protect Your Unpublished Writing

“Establishing trust with those who will work on your unpublished manuscript − your editor or beta reader, for example − is the key if you want to protect unpublished writing.”

How to Write a Novel: A 12-Step Guide From a Bestselling Author

“I use a repeatable novel-writing plan—one that helps me smash through those obstacles. And that’s what I reveal to you in this definitive guide.”

“Writing advice comes at all levels of quality, from enlightening, to helpful in some circumstances, to story-ruining.”

The Developmental Edit: Are you (emotionally) ready?

“A developmental edit can feel a lot like sending your child to school for the first time. You’ve had several years to exert your influence on his upbringing and must now allow others into his journey.”

» Writers In The Storm

With Fewer Debut Novels Selling, What Do Editors Want To Tell Authors?

“In a tightening market for fiction and especially for debut authors looking for that big break, editors can be choosier—and many are more dependent than ever on literary agents to find their next debuts.”

Writing a Novel: What To Do When You Get Stuck (You Will)

“Writing a novel is a journey, and it’s never a trouble-free one. Indeed, it can seem as if you’re plunging from one disaster into the next. You will get stuck… If you expect to get stuck, you’ll succeed in completing your novel.”

Zero-Cost Book Publishing: Write, Publish & Sell Your Book Yourself… for Free!
Free Domain Names: Where to Get Them and How to Use Them
Spread the love
Reader 06/15/18 Edition Reader 06/20/18 Edition