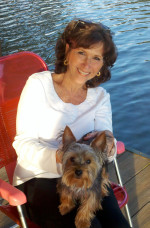 Unlike other authors, Poll Iyer didn’t start writing stories when she was a child — she drew pictures. An art major at the Massachusetts College of Art and Design, the first few decades of her professional life naturally revolved around art-related fields. “I thought of story ideas,” she says, “but they were always visual, as if they were movies. I never considered writing anything down.”

Then a story idea start gnawing away at her psyche, like some ideas do, thirteen years ago. That got her to sit down in front of a computer and start writing.

She hasn’t stopped since. She’s pumped out a number of mysteries and thrillers, like her Diana Racine Psychic Suspense series, “all with a touch of romance and characters who sometimes tread ethical lines.” And true to her background, she often works in some artistic element into her stories, such as a character that is “an artisan, performer, a docent at a museum, or even a writer.”

She says she hasn’t cracked the national bestselling ranks, yet, although a couple of her titles have made it to Amazon’s Top 100.

In all those years of publishing, however, none of the books were her first, the original idea that got her veering off on this whole different career path. Until now. After thirteen years of numerous revisions and rewrites, Polly’s happy to finally share her book, Threads, with all of us. (And personally, I would find it really eerily interesting if Threads ended up being Polly’s first national bestseller.)

How Polly Got Started Self-Publishing 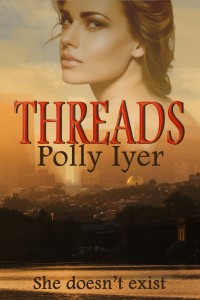 After going through three professional edits, Polly started querying agents about her first book. No bites. But she kept at it, writing a second and third book, sending out queries for those too. “I received a stack of rejections,” she recalls, “but I kept sending them out, kept getting rejections.”

She got herself an agent too. “We hit it off. She liked my work, answered my emails, and did her own round of querying editors. A couple came close to contracting my work, but no one did.”

What finally moved her to self-publish? Time. Although her prospects for getting traditionally published were still promising, the process was taking too long, and she realized she wasn’t getting any younger. By that time, she already had quite a number of books written and ready to go.

“My decision at that point to self-publish was a no-brainer. Using my art background, I created my own covers. I’ve now published six books under my name and three under a pen name.” And the best part? “I’m having the time of my life!”

Learn more about Polly and her work by visiting her Amazon author page and her website.