[themify_box style=”light-yellow note rounded shadow”]So we figured out last issue the Big Five sabotages ebook sales. Not that it’s really needed at this point, but what more can we throw on the fire to render those periodic “industry” reports and sales numbers even more useless as industry barometers?[/themify_box]

How about this doozy:

Wha? Why the heck not? It’s not as if there’s a doubt in anyone’s mind that the company’s the #1 seller of ebooks on the planet.

Well, we can’t blame the “industry” for this one — Amazon doesn’t report its sales data to anyone. It’s under no obligation to do any such thing (told you the “industry” lost control of this part of the market), so what do they do when anyone asks for it? I picture someone over at the Zon just going, “OK, sure, we’ll get right on that. LOL!”

We’re not talking about sales of Big Five ebook editions, of course — those are counted because obviously, the B5 will have those figures. It’s our numbers, the indie stuff, that Amazon’s keeping under its hat.

I don’t think I have to point out that a lot among our ranks are doing very well. Heck, I interviewed a good number of former B5 mid-listers right here in Wordpreneur years ago, back when they were first becoming aware of the possibility of reclaiming the rights to and reviving their practically dead B5 titles… and a bunch of them did and have been doing just that. Then there are the “rapid release” folks, the “serial” dudes, the “erotica” bunch, and on and on and…

…well what? This is still all just anecdotal evidence. There are no official counts reported by Amazon. At all. And again, can’t blame the “industry” for that.

What we can blame them for, however, is pretending all this activity doesn’t exist. Which they argue then ergo means since their ebook <cough cough sabotaged cough> sales figures are flatlining, the dead tree book market must be alive and well and healthy! And the claims and data in all these “industry” reports must be true because, look, all these important news media vehicles are reporting them without question! (“Oh, don’t look in that ledger with all the B5 ad spend records, silly rabbit, none of that’s important. Here, have you seen James Patterson’s 14th new book release this week? Already on the NYT bestseller list!”)

Uh huh. Anyone else besides me smells bullsh*t? Or are you really that much into fairy tales?

Now, I’m not saying this is a good thing — only Amazon has the complete, clear picture! — but what I am saying is all those reports about ebook sales stagnating, even sinking?

You’ll have a much better chance convincing me the Illuminati’s behind all the bookstore closings.

I think that about covers this topic simply but sufficiently enough. Takeaway? I think there’s only one, really: Don’t trust any of these guys. Not the Big Five. Not Amazon. These guys are at war and using information as weapons. We best try to pay close attention to everything and hope our biases don’t get in the way of making clear judgment calls.

Well, enough of that. Maybe I can interest you in a dozen decent to good articles to help expand your wordpreneur know-how? Just look below! 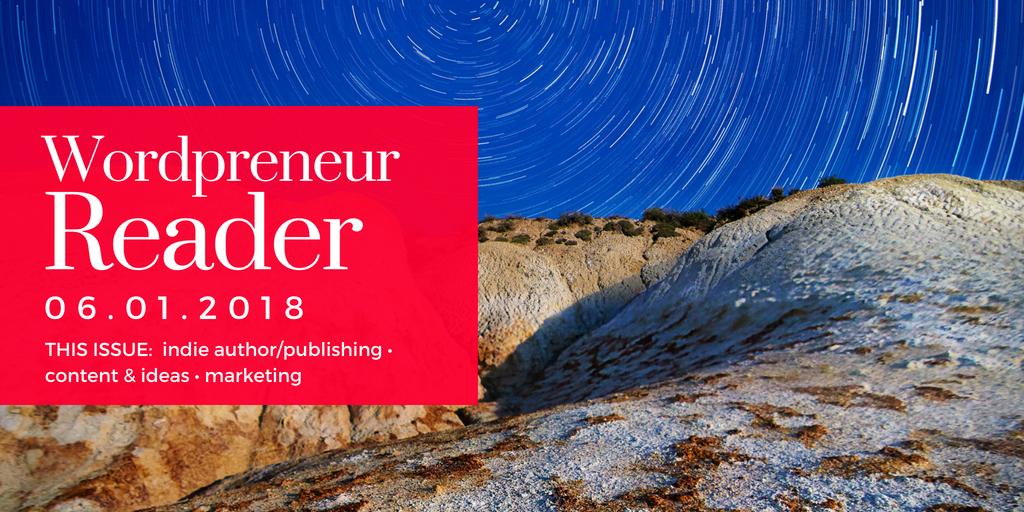 Audiobook Production: How to Choose a Narrator for your Self-published Audiobook

“Choosing the right narrator for your self-published audiobook can make or break its success, but what’s the best way to go about it?”

Blurbing: How to relay a story with minimal headache

“Blurbs are an absolute necessity for marketing your book, and the sooner you have a good one, the easier it is to get people interested in your work.”

How Do I Find Money to Write a Book

“While this tiny editorial cannot begin to go into detail on each financial availability, it can list the possibilities to at least let you realize your options.”

How to Find Unique Speaking Opportunities to Promote Your Novel

“[Y]ou’ll see a world of opportunity awaiting writers who are willing to step out from behind their computer screens and speak about their work.”

How to Write a Killer Author Bio

“An author bio is like a calling card. ‘It’s something that will let readers get a sense of who you are, and is an important part for pitching media and book proposals…'”

Is Your Book Cover Too Cluttered?

Numbers that Matter in Book Publishing

“With online eBook sales, among other factors in the mix, print runs ain’t what they used to be. But they are still passionately discussed and closely watched.”

How to Tailor Your Social Media Content For Mobile Users

“Now that mobile users have surpassed desktop (and has since November 2016), it’s time to think more strategically about the content you’re posting on social media.”

Publishers try to use ad annoyance as a lure to subscribers

“Publishers hunting for subscribers like to say they’re delivering an experience worth paying for. Increasingly, that’s starting to mean ‘one that has no mobile ads.'”

Launching a Startup Digital Marketing Campaign on a Tight Budget

“[Y]ou should consider launching a digital marketing campaign… [T]his does not mean you won’t spend any money. It simply means you will be able to afford it and still get a good conversion rate.”

Zero-Cost Book Publishing: Write, Publish & Sell Your Book Yourself… for Free!
Free Domain Names: Where to Get Them and How to Use Them
Spread the love
« Reader 05/30/18 Edition » Reader 06/04/18 Edition