[themify_box style=”light-yellow note rounded shadow”]“Internet? And a company called Amazon wants to sell our books on it? hahahahaha Sure, not a problem. They can all knock themselves out on this ‘Internet.’ hahahahaha!!!”

I like to imagine that’s how one of the bigwigs of the Big Six (which is how many of them there were back then) reacted upon being informed of this new thing called the Internet and how a tiny startup wanted to make a go at being a cyberspace bookstore. Heck, not really difficult to imagine ALL of them reacting in a similar fashion.

Yeah, laughter and likely mocking all around at all this silliness, and back to “business” controlling that good old distribution system, as usual.

I’m sure there wasn’t much laughter when they eventually realized later how screwed they were. They’d let some other now-not-so-small company totally dominate what they’ve figured out is an incredibly important, huge and growing market for their product. A market eating away huge chunks of their existing one. By a company founded and run by an “outsider.” Someone brilliant.

It sure didn’t help matters any the dude was working some weird-assed gameplan none of them could figure out, they couldn’t rattle the guy and he held and played all the right cards. In a game he was writing the rules for.

I’d like to think that at that instant of realization, the group of book publishing bigwigs uttered a collective, “Sh*t.”

Now, although it’s fun going through all this backstory, it’s not really giving answers to the question we’re tackling with this writing exercise. Which, if you’ll remember, is: Why expect industry sales reports for ebooks to be less than stellar?

So let’s fast forward to the age of the Kindle, aka the true modern ebook that can viably replace traditional books, not that crappy little-more-than-Xerox-copies-on-a-computer-screen PDF crapola (which, unfortunately, many Luddites still think is what ebooks are all about, by the way… sigh).

Let’s cut to the chase, shall we? The Big Five hates the ebook business. Obviously and understandably. Hell, if Luddites — who’ve got no skin in the game and have little in the way of sensible arguments save maybe for some fetish for the “smell” of old books — despise ebooks, what more the folks who’re cut completely out of that book distribution and control thing for the new marketplace? The one that’s chomping away at their old one with that convoluted archaic system they actually do control. Well, they know how to fix that. What do they do? They price their ebooks way too high.

Yes boys and girls, only a biased dimbulb can’t see that they’re sabotaging their own freaking ebook sales.

Check it out for yourselves. Quick checks through Amazon reveal Kindle pricing within just $2-3 of hardcovers, often even less. Are you kidding me? At those price points, screw the digital crap… I’m killing a tree. And getting a hardcover! For that kind of money, I’m going full hog with a total sense of book ownership instead of simply consuming content. (That, by the way, is the one clear thing that comes to mind that dead tree books give you that ebooks can’t, something I wrote about years ago in the old Wordpreneur, around 2010 to be exact.)

And here’s one that’s particularly interesting that will help drive the point home: As of this writing, near the top of the NYT bestsellers list is the James Patterson fiction factory’s The 17th Suspect. Hardcover price? $14.50. Paperback? $11.81. Kindle? $14.99.

Sure, there are a lot more really fun tidbits on this particular topic I can share, but time and place, huh? This isn’t it. Let’s just say for our purposes, the integrity of those recurring industry ebook sales reports are, shall we say, highly questionable.

I will add this, however: If anything, all these reported ebook sales figures should actually rattle the bejeezus out of your dead tree book loving soul. No, not because the Big Five dingleberries are futzing around with the prices and sales figures — can’t really expect much better from those guys. It’s this: Do you realize that even with all that sabotaging, ebook sales are still significant? BOOM! Imagine what it’d be really like if the Big Five quit playing sneaky dirty. Tsk tsk tsk.

Next issue: The biggest reason why those industry ebook sales figures are about as reliable a picture of the truth as people’s social media profile portraits. In the meantime, here are today’s dozen to tide you over until then. Enjoy! 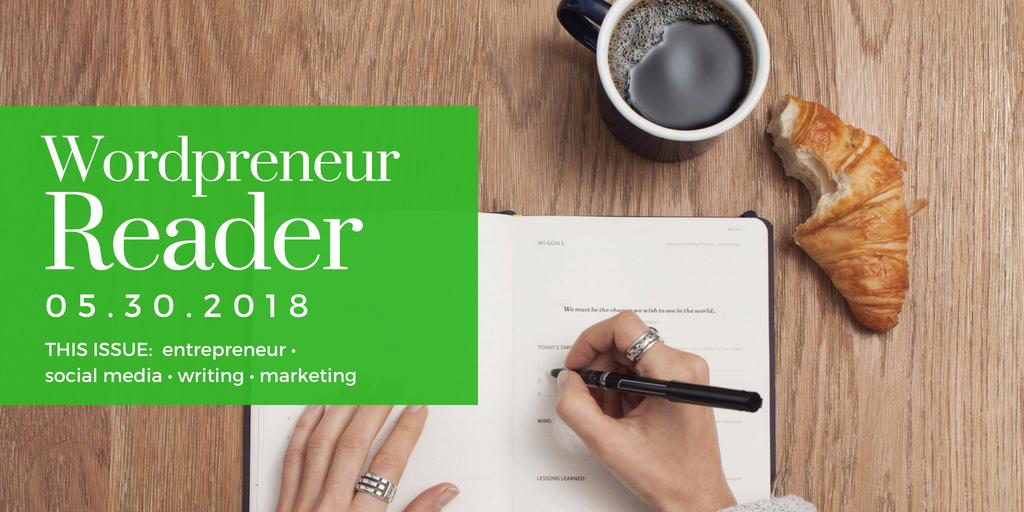 “Looking to make it to millionaire status? Simply do as the rich do.”

“You’ve heard the quote ‘perception is reality’, right? … Well, the way digital entrepreneurs perceive themselves, their customers, and the opportunity around them impacts their ability to succeed.”

“For start-up founders the world over, growth is often far from linear. But the fast-evolving French start-up ecosystem can be a real roller-coaster ride.”

“One of the best ways to differentiate yourself from the competition is by making it easy for your customers to get in touch with you… Talking about live chat… almost a third of consumers prefer this channel of communication.”

“It’s rare for a day to go by without me scrolling through my Facebook feed. And I’m not alone: According to DMR, 65% of Facebook users log on daily.”

How One Provocative LinkedIn Post Can Transform Your Career

“Your opinion could be your most powerful tool… Murphy could not have foreseen what was going to happen next.”

Thirty Minutes a Day is All It Takes to Automate Your Social Media Activity, But I Don’t Recommend it

“[W]e are always looking for new ways to automate tasks… Sometimes, however, the automation is counterproductive or just isn’t worth using.”

Heal Yourself — And Others — Through Writing

“In order to benefit fully from the healing medicine of telling your story, you must resist holding anything back.”

How to Reinvent Yourself as a Thriller Writer

“The crime genre, with its extremes of emotion and stakes, is full of possibility for reinvention.”

“Based on the popularity of specific visual marketing trends in the last year, here are a few areas where videos, gifs, images, and other media can help marketers create engaging campaigns…”

How to Fix 5 Conversion-Killing Copywriting Mistakes

“[T]here are ways to reduce the number of leavers. Some of those people leave as a result of totally avoidable mistakes we’ve made when writing the sales page.”

Zero-Cost Book Publishing: Write, Publish & Sell Your Book Yourself… for Free!
Free Domain Names: Where to Get Them and How to Use Them
Spread the love
« Reader 05/28/18 Edition » Reader 06/01/18 Edition