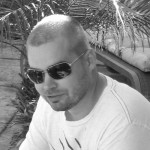 Matt Tomerlin was born in 1979 in sunny Southern California. He has written two novels, The Devil’s Fire and The Devil’s Tide, both part of a pirate adventure series. He is currently working on The Devil’s Horizon and a science fiction novel. Matt resides in Murrieta, California, where he works as a freelance graphic designer when he isn’t writing.

How Matt Got Started Self-Publishing 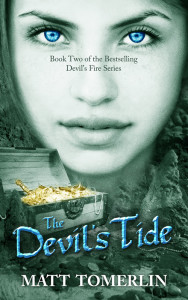 When he was between jobs several years back, Matt started researching pirates in great detail and decided to write a dark and realistic pirate novel. He had always been fascinated with pirates, and like everyone is a huge fan of the Pirates of the Caribbean Disneyland ride. He finished a rough draft, let a few friends read it, and then forgot all about it after landing a new job.

He did not revisit the book until 2011, when he noticed the ebook industry was booming. He quickly began polishing the novel, adding detail where he felt it moved too quickly, and wrote a few more chapters. “It was helpful to have a fresh perspective on it after so many years,” he says. Later that year, he published The Devil’s Fire on the Amazon Kindle platform and watched it gradually build momentum in sales. It wasn’t long before enthusiastic readers were demanding a sequel!

The first book ends on a bit of a question mark, and readers wanted to know where the main character, a brave young woman named Katherine Lindsay, would go from there. So this past summer, he published The Devil’s Tide on the Kindle, and saw immediate sales, thanks to the thousands who had already read the first book.

He is currently working on the third and final entry in the series, The Devil’s Horizon, which will be released in 2013.

Learn more about Matt and his work by visiting his website where you can download a copy of his free ebook. Drop by his Amazon author page as well and check out his growing selection of popular titles.