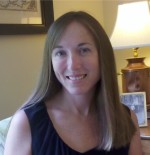 As Riley Adams, Elizabeth Spann Craig writes the Memphis Barbeque mystery series for Penguin/Berkley, the Southern Quilting mysteries for Penguin/NAL, and the Myrtle Clover series for Midnight Ink and independently. Her latest book, a self-published title, is A Body in the Backyard (Myrtle Clover) and her next one, Knot What it Seams (Southern Quilting) releases February 5. Her Mystery Writing is Murder blog was named one of the 101 Best Websites for Writers by Writer’s Digest for 2010, 2011, and 2012.

How Elizabeth Got Started Self-Publishing

When Elizabeth decided to do her first self-published title, she was already pretty involved in traditional publishing, having had a standalone book with Midnight Ink and two mystery series with Penguin books. When Midnight Ink decided to pass on a sequel she wrote for them in 2010, however, Elizabeth was conflicted — she enjoyed the characters in the mystery and readers had responded well to the book, asking when more books in the series would be released.

Her agent suggested that they shop the book to other houses — including Penguin, which had been interested in acquiring the first book. But Elizabeth felt that the process of searching for another publisher, negotiating a contract, and then adding on the necessary production time would take too long, possibly causing her to lose readers.

After hearing other writers’ self-publishing success stories, in 2011 she decided to hire a team to help her edit the manuscript, format the book, and design a cover. Finding it difficult to locate a production team, she later created a free listing of cover designers, formatters, editors, and other service professionals: Ebook Services Professionals.

Her self-published book has become such a success for Elizabeth, she has since published two additional books in the same series. She plans to continue self-publishing on top of writing books for Penguin as well. She hopes that the traditional publishing industry will be able to make the changes necessary to compete in a digital world, but feels that writers will win either way.

When you self-publish, she recommends that you find a good freelance editor to help you polish your manuscript. She also feels that it is very important to just keep on writing and pumping out books — not only will you improve your craft, but you’ll also increase your chances of being discovered on the marketplace, particularly on platforms like the Amazon Kindle.

Check out Elizabeth’s author page and books for sale on Amazon.com. You can also follow her on Twitter where she regularly tweets links to writer’s tips and resources.